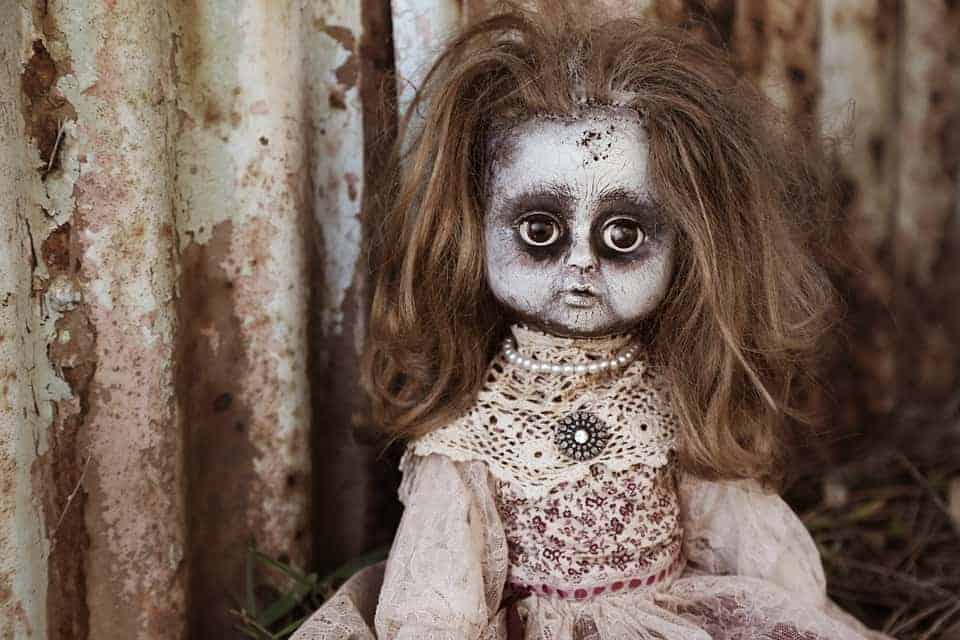 We know zombies are fictional characters, mostly found in horror and fantasy movies. We all enjoy watching zombie movies, don’t we? But have you ever thought of falling in love with a zombie or marry a zombie? Sounds bizarre, right? Well, there is someone, you might get surprised to know, so deeply in love with a creepy zombie doll and all set to marry her. I know this may take some time for you to take in, however you will understand if you read the whole article.

I am talking about Felicity Kadlec, a nineteen years old teenager has fallen in love with a zombie doll. The doll is named Kelly, which is covered in fake blood and has a mangled face. Felicity lives in Massachusetts, claimed that she and Kelly have been in a real relationship for almost three years which is absolutely normal to her.

How did the relationship start?

Now you might be wondering to know, how a serious relationship between a human girl and a doll could start. Felicity got the doll as a birthday gift on her 13th birthday. She first saw Kelly on a creepy doll collection website and got her as a present at the age of thirteen. At the age of 16, she started getting romantic feelings for the doll. Though she wanted to deny it at first, but she couldn’t resist herself from expressing her love for Kelly, and ended up having a serious relationship with her.

How is their relationship?

Don’t you want to know, how they are maintaining a serious relationship like a normal couple? Felicity said that she had sincere feelings for the doll from the beginning of their relationship. Felicity had boyfriends in past, who were obviously humans. But she never felt that way for them as she feels now for the doll. Felicity has also said that they get intimate like normal couples. Felicity has tattooed Kelly’s name on her arm, as Felicity believes the doll is going to be a part of her life forever. She stated that their relationship is progressing in the normal way. To legitimate their relationship, Felicity has decided to get married to the doll this September, as it is the same month as both of their birthdays. She has already bought the engagement rings for both of them. She expressed that she feels a genuine connection whenever she gets intimate with the doll. Though she had complications as she was confused whether this was right or wrong, eventually she became confident about her love for the doll.

How their relationship is observed by others?

For obvious reasons people around Felicity, still can’t accept the fact that she is having a serious relationship with a doll rather than a human being. Her friends and family keep criticizing their relationship. But Felicity doesn’t really care about what others say about them. She is quite confident about her feelings for the doll. Her friends and family want her to be with a real human, but to her Kelly is real. Whenever she goes out for dinner or some occasion with other people, they don’t let her bring Kelly with them. Because of course, people are going to stare at them for carrying a zombie doll of disturbing figure at a public place. That’s why Kelly always has to stay inside the car whenever they go out, thus Felicity and Kelly never could have an actual date in public. Having all these obstacles Felicity is still determined to continue this obscure relationship.

You might be thinking that whoever got her the present at first place is regretting now for giving her that doll. Well, maybe yes, but we really can’t blame it on him, can we? Just like you and I, they could never imagine, a human girl can really have genuine feelings for a doll. We don’t know what the future of this relationship is. However, we wish them luck in their upcoming marriage.

For some people, finding a partner in life can be difficult. For others, it’s almost impossible. But you’ll be surprised to know that there are some other people who are having a serious relationship with dolls like Felicity.
Senji Nakajima, a 61 years old Japanese man, started having a serious relationship with a sex doll, named Saori. He takes her for shopping, watches TV with her, and sleeps with her every night. For him, Saori is more than a doll and a perfect life partner. At first he used the doll for sexual activities when he was away from his wife, but soon he realized his feelings for that doll. He thinks having a relationship with a doll saves you from heartbreaks and complications.
Davecat, from Michigan, married a sex doll; named Shi-chan. He also bought that doll for the sexual purpose in 2000. But it didn’t take him too long to realize his feelings for that doll. He even got married to that doll and maintaining a normal married life with her. His father finds it really difficult about his relationship with Shi-chan, as it seems to be unnatural and sort of strange. However, Davecat is continuing the marriage and spends most of his time in his room with the doll. He dresses her, appreciates her, and takes care of her.

This whole thing may sound ludicrous to you, but this is actually what is happening. Now why on earth humans would fall for dolls? Only they can give you the answer of this question. Maybe they are just getting bored of the human world, and finding peace and solace with the dolls, with who they really can be themselves. In this era of modernization, people are less interacting with other people. This is probably the main reason behind these absurd decisions. They are being obsessed with loneliness, and that is why they are avoiding relationships with human beings, by getting engaged with dolls or inhumanly things.