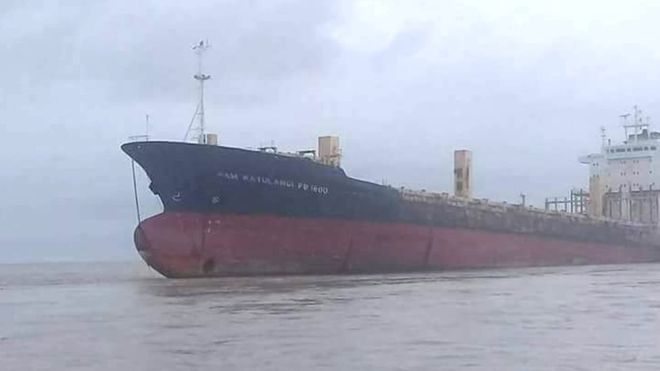 Another ghost ship! An abandoned ship found in Thongwa, Myanmar is now a hot topic. But, What’s behind it?

A mysterious ship “Sam Ratulangi PB 1600” was floating near the coast of Myanmar’s commercial capital. Locals reported it to the police. Then, the Authority took action to investigate. Mysteriously, When coast guard entered into that ship, they found no sailors or not even a single living human.

But, What’s Behind this Abandoned Ghost Ship Found in Myanmar?

It is still a mystery. The ship is bearing the Indonesian flag. So, Authority assumed that it comes from Indonesia. Myanmar’s neighboring country is Bangladesh. The port city of Chittagong has a ship breaking the industry. Old and unseaworthy vessels are often towed to Chittagong. So, Some people are assuming the ship might be towed towards Bangladesh.

But, According to the Marine Traffic website, This ship was last seen in 2009 at Taiwan coast. This vessel was built in 2001. It is still in working condition.

This puzzle is not still explainable why a large 580 ft abandoned ghost ship is in the Sea and who towed it to Myanmar. Why there is no goods and living creature?

To find those answer, we will need to wait for next few hours or days or even years. Stay tuned, we will update this article once we can break the mystery of this ghost ship found in Myanmar.

Update: Why The Ghost Ship Appeared in Myanmar

The ship was being towed towards Chittagong coast of Bangladesh. But, Due to a sea storm, that ship was separated from the pilot ship. This is the actual reason. There are no paranormal or supernatural reasons.