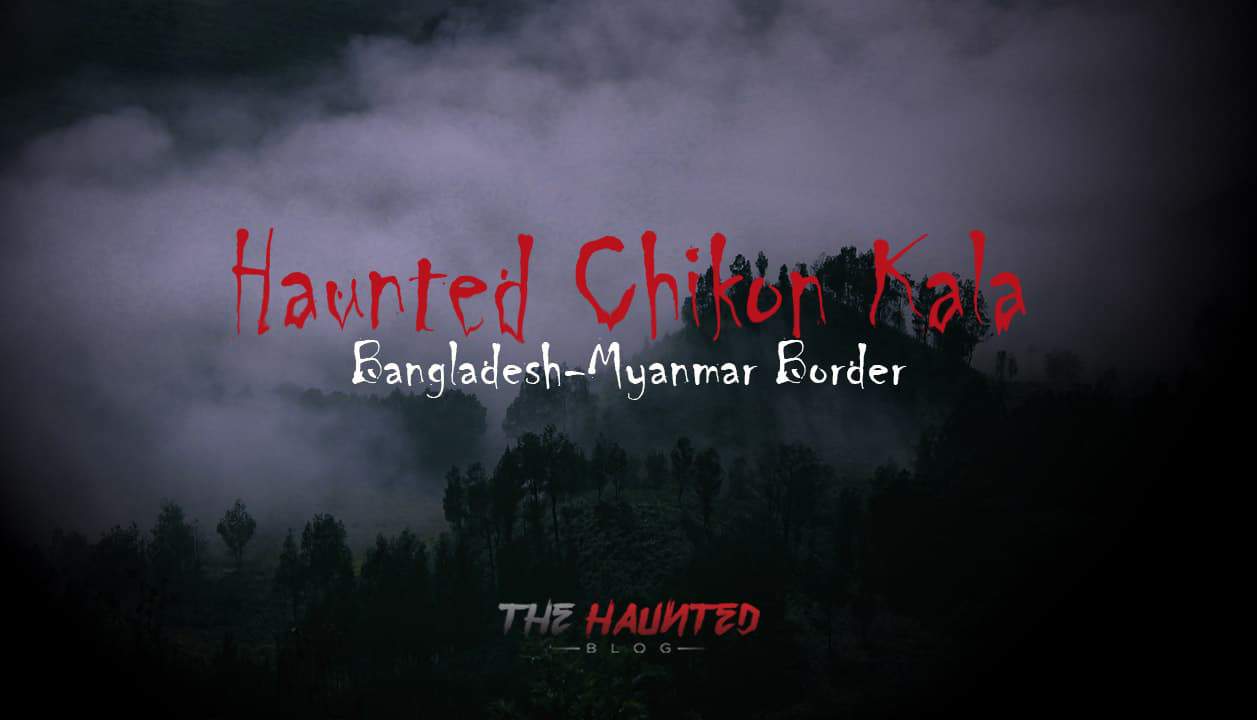 Haunted places in border areas of two countries are not uncommon. If you search on google, You may find many of them. But, The people of Bangladesh may become surprised to know that there is an extremely haunted place situated on Bangladesh-Myanmar border. Even, Anyone will have a blood-chilling scary feeling after knowing about it. This place name is Chikon Kala which is situated at Tlang Moy (Saka Haphong) between Bandarban, Bangladesh and the Chin State of Burma. There are so many folks about a jungle of this area. People know it as a haunted forest of Chikon Kala. The Chikon Kala is an amazing place. But, It is really not easy to go there. There are different kinds of wild animals like Bear, Deer, Leopard, Wild Cat, Wild Bore, Pea-cock, Elephants and snakes etc. The communication system of Chikon Kala is not good enough. But, Tourists who have visited this place often appreciate its natural scenes of this hilly area. But, Usually people don’t visit the forest I’m talking about. It is not because of the wild animals. Locals often forbid tourists to visit the forest.

Locals (Murung Tribe) believe there are some evil powers in Chikon Kala jungle. Sometimes, A mysterious sound comes from this forest. In that time, If anyone fails to escape from the forest immediately, He / She will never return alive. By this way, Locals lose three or four, even more peoples in this forest every year. After a few days, They find the missing people’s dead body which doesn’t have any sign of injury. Locals clime that it still happens. So, Usually, they avoid this forest especially from the evening to dawn.

A True Horror Story About Haunted Forest of Chikon Kala:

This story was shared by a person in Bhoot FM (A popular program of Radio Foorti based on true horror stories) on 27 January 2017.  According to that person –

In 1979, Myanmar army tortured so many Muslim Rohingyas in Rakhine State. As a result, So many Rohingya refugees came to Bangladesh. BD Govt. gave them shelter in Cox’s Bazar. That time, A research team came to Bangladesh from the USA to talk with Rohingya peoples and know about the real situation. They stayed here for 2 months. One day, They heard of a strange haunted place called Chikon Kala. Then, They decided to visit that place to discover the mystery.

One day, They went and stayed there from morning to evening. But, They did not find any thing weird. By this way, They wasted five days. But, The team did not get a single sign of paranormal activities. Everyone become bored and annoyed. They started to think that the place was not really haunted. It was a folktale. They decided to not going there again. But, One of their members argued and asked them to go there one more day. Yes. They went there next day. Morning, noon and afternoon had been passed. No sign of haunted activities. But, When evening came and they decided to leave Chikon Kala jungle, Five of them started to hear something weird. According to the team, Everyone heard different type of sounds. One member felt like it was being earthquake and at last he could sense some soldiers were coming towards them by riding horses. Another member was hearing a sound of storm. He felt a strong wind was blowing around them and it was destroying everything. By this way 5 members heard different type of noises. They decided to leave the forest immediately . Because, They remembered what locals told them about this haunted place. At last, Five members left the forest. But, One stayed there as he did not hear or feel anything. When he became completely alone in the jungle, He started to hear some unclear whispers. It seemed like some weird creatures were talking to each other. He tried to hear more clearly and understood that they were not talking to each other. These paranormal things were saying something to himself. He got scared and left the forest.

This story could be ended here. But, No. The person who left the haunted chikon kala jaungle lately, He faced so many paranormal things in his life. Specially, Almost every night, He heard that whispers. He tried hardly to understand what the ghosts were trying to say. At  last, He understood. It was Egyptian language. If anyone translate it, This will be something like “You will die, You will die…”. He was an Egyptian but lived in South Carolina, United states with his family. His family members also heard whispering sounds at night. Anyway, That person died after 5 years of this incident. But, His death was not normal. When peoples looked at his death body, It seemed he became so scared by seeing something horrible and died.

You can listen the whole story from the 27th January episode of Bhoot FM which is a Radio Foorti program.